What You Didn't Know About Covid-19

It’s been a while! So much has escalated since the beginning of this term till now. From donning our face masks around campus in early February, to health screenings and temperature checks at every corner, and to now being quarantined within the four walls of our house.

Who knew a month could last forever? And we’re not even halfway done with the year!

So what do we do to keep from drowning in boredom (and cursing the virus)? Well, we whipped out some fun, or rather interesting, facts, and bits of knowledge to keep you company during this strange time!

1. What even is a CORONAvirus?

It’s safe to say you’ve probably come across this word at least a dozen times since the last month by now. With our faces glued to news portals for ongoing updates and hopeful news since the beginning of the dreaded quarantine, let’s turn a little technical to discuss what goes into its name.

The word ‘corona’, coming from Latin and Spanish roots, means crown or resembling a garland or wreath-like appearance. The virus has no connection to royalty though (other than for infecting a certain British royal figure) but rather, are named for the crown-like spikes on their surface. A lot like a rambutan or sea urchin.

(For those in need of some visual representation, it's similar to the the picture on the right.) 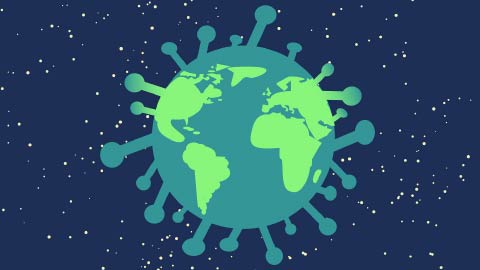 While coronavirus is the generic name attached to the crown-like virus, each virus has a specific name given by the International Committee on Taxonomy of Viruses (ICTV), a group that names viruses according to how they’re structured. This particular virus was named “Severe Acute Respiratory Syndrome CoronaVirus 2 (SARS-CoV-2)”. Though they’re different, this virus got its official name because of the genetic relation to the SARS outbreak in 2003.

If it has a similar genetic structure, why COVID-19, you ask? Remember the amount of fear that arose from SARS and H1N1? *cue war flashbacks* Well, that’s exactly what the World Health Organisation (WHO) wanted to prevent - unintended consequences and unnecessary fear. Hence, the name Covid-19 was born.

Coronaviruses are also categorised into four sub-groupings known as alpha, beta, gamma and delta (no we’re not talking about sorority houses, we mean the Greek alphabets!). Typically, human coronaviruses come from evolved animal viruses, especially from flying vertebrates, like bats and birds, which are generally considered good hosts for the gene source.

It’s easy to get confused over all these terms so let’s break them all down, starting small!

According to Intermountain Healthcare, an endemic is a constant presence or a fixture of something that belongs to particular people or country, like malaria in certain parts of Africa or chickenpox in the UK. It turns into an outbreak when the spread of illness or disease is greater than anticipated and eventually becomes an epidemic.

An epidemic occurs when it begins to affect a larger populace of people within a community or region, like when the coronavirus continued spreading within the region of Wuhan, China itself. However, things take a turn for heightened danger when it begins expanding over to multiple countries and continents, causing a pandemic and a state of emergency.

Phew, we know that’s a lot to take in! But bear in mind, it’s useful to know the differences between each state to identify how it affects you in the long run. Generally, epidemics and pandemics are red signs of danger and caution so it’s important to be aware of how to avoid areas and regions that are contaminated or red zones in future.

3. Sorry folks, but Tangled did NOT predict the future!

If you hadn’t caught wind of the wild theory that had been floating about in mid-March, then here’s a mini catch-up on how the 2010 Disney movie has an odd connection to the pandemic.

As you know, the film’s heroine Rapunzel, born to royalty, was kidnapped from the Kingdom of Corona and imprisoned in a tower by the villain, Mother Gothel. As Rapunzel grew up ‘quarantined’ in the tower, Mother Gothel cautioned her from going outside, explaining that the outside world was dangerous and life-threatening and refused to let Rapunzel come in contact with anyone besides herself. Sounds pretty familiar eh?

People quickly took to social media with claims that Tangled predicted the future 10 years early and that Disney warned us about Coronavirus since 2010. What’s funny is how much of an internet frenzy it turned into, even becoming one of the Top Google Searches over the week!

Sorry conspiracy theorists, but this one’s been debunked!

The only thing they even have in common are the loose ties to nobility, as seen in #1 above, but claims of foreshadowing are a bit of a stretch. In the meanwhile, you can always use this opportunity to catch up on the iconic film and maybe take some tips from Rapunzel herself on how to sit through a quarantine?

4. Cold temperatures CANNOT kill corona, despite what our moms say!

A common myth that exists is that freezing temperatures can help kill or detox general bacteria.

While that is true to some extent, the WHO announced that the only prevention that still stands is washing your hands with alcohol-based handrub or soap and water. So, remember to wipe down your cartons and packets with bleach, disinfectant, or soap water, after purchasing them from shops to be extra safe!

Popping them in the fridge ain’t gonna solve the issue.

Some other myths that have been deflated are that having hot baths is a useful prevention against the virus and that mosquitoes are able to transmit the virus around (thank God it’s not fleas and the bubonic plague resulting in The Black Plague!).

PS: Whether or not your parents have gained PhDs on the coronavirus after graduating from the school of Whatsapp threads, it’s important to fact-check from reliable sources. Waste no time filtering out unreliable sources by keeping up-to-date with the Coronatracker (fun fact: our School of Biosciences are contributors too) that ensures all the facts you are getting aren’t fake.

Remember that being aware, especially during this scary time is key to avoiding potential threats.

As always, wash your hands regularly, maintain social distancing, catch up with your friends (virtually, of course), and keep up the optimism. The situation isn’t exactly favourable and we all crave to get back to our daily lives, but look on the bright side — if anything, at least this quarantine has brought on a new-found appreciation for the outside, and definitely a story to tell the grandkids!

PS: Unsure of how Covid-19 is affecting your studies here at Taylor’s? Find out more here.

Karen Grace Prince is currently pursuing a Bachelor's Degree in Mass Communication (Honours). She is also the Director of Events Committee for the Taylor's Model United Nations Club (TLMUN) and Director of Ext. Operations for TLMUN 2020 Conference Secretariat Team.