Taylor’s College recently celebrated the outstanding academic achievement of students from its Cambridge A Levels programme as well as their progress into top universities across the world, including University of Cambridge; University of Oxford; University of California, Los Angeles; London School of Economics; University of Malaya and University College London, among many others.

Taylor’s College Campus Director, Josephine Tan said that the June 2017 cohort achieved an outstanding 100% passing rate with an astounding collective achievement of 1,095 A’s, of which 569 are A*s.

“This group of A Levels graduates have created a new personal best, with 42% of the class achieving 3A’s and above in the examinations. From our 241 high achievers, 167 students; or 69.3%; achieved 4A*/4A’s. This outstanding achievement on the part of our students is testament to the hard work and diligent attitude they possess but also a reflection of the strength of our academics,” she said.

Nicholas Sim Wei-Hao, one of the six students to be accepted into University of Oxford, agreed, saying that the most memorable aspect of studying at Taylor’s is the interactions with his peers as well as his learning experience at Taylor’s College.

“My last two years has allowed me to equip myself academically- not just in terms of the discipline specific knowledge but also acquire knowledge on how to handle the university admissions tests. I would like to thank the counsellors and advisors at Taylor’s University Placement Service who guided me every step of the way through my admissions process,” said the 4A* scorer. Nicholas will be heading to Oxford to study Materials Science.

Fellow 4A* scorer, Lee Qi Cheng, said that her studies at Taylor’s College provided her the platform to grow her ability to learn independently, which is a key aspect of learning in university.

“I also gained tremendously from being surrounded by peers who are as driven and motivated by personal goals as I am. The conducive environment at Taylor’s has pushed me to always give my best, but has allowed me to also keep my personal expectations in check and not allow mistakes to let me down,” said the Bank Negara Malaysia scholar. Qi Cheng, one of three Taylor’s students to gain acceptance into University of Cambridge, will be reading Economics.

Another Bank Negara Malaysia scholar, Sugheson Nagarajan, said his education at Taylor’s College has played an influential role in shaping him to be the person he is today.

“I have benefited greatly from the two years at Taylor’s. In terms of academics, there has been enormous support from my friends and teachers. Getting to where I am today has been rough and challenging experience, but thanks to the right group of friends and conducive environment, I have been able to sail through the 2 years at Taylor's.

“My peers are very supportive and hardworking individuals and studying together with them allowed me to be in the midst of a competitive but healthy environment that encourages cooperation and collaboration. Taylor's College is such that it attracts students with such character and personality. With the right group of friends, the journey becomes exciting and adventurous.

“The active co-curricular scene in Taylor's College also provided me with many platforms to hone and harness my potential,” said the Penang native.

The awards ceremony was certainly a close knit affair with CAL top achievers from the two Taylor’s College campuses - Subang Jaya and Sri Hartamas - cheering each other on, especially with the announcement of the two President’s Awards recipients; Chan Chee Ken and Lee Ting An.

Chee Ken was awarded the distinguished award as a result of his single-minded approach to excellence as well as for being a very dedicated and responsible individual who possesses self-reflective skills and a capable student mentor. Chee Ken, who studied at the Subang Jaya campus, is an intelligent and very well read young man who has shown an incredibly inquisitive nature and is articulate in presenting his ideas and meticulous in constructing arguments.

His particular interest in epidemiology and public health issues has guided him towards pursuing the medical profession. He obtained 4A* in his recent exams and has secured a seat in the prestigious University Malaya to pursue his passion of being a doctor.

Ting An has an illustrious track record of both academic and non-academic achievements. His teachers describe him as a great multi tasker and a student who is always willing to accept advice for improvement. He is not only an outstanding student academically but is versatile and creative and has the courage to take on tasks outside the academic area. He is also a committed leader who can take the lead and manage the team members. He served as the Head of Route Planning for Taylor’s Jog for Hope event in Sri Hartamas, which attracted 1,800 runners and went on to collect RM69,000.

He is also skilled in diverse sport activities; especially in fencing, having played the sport for many years. He has represented his previous school and club in local and international competitions, but most recently, has represented Malaysia in fencing in Bangkok in 2016. He will be pursuing a degree in Biotechnology at Imperial College London. 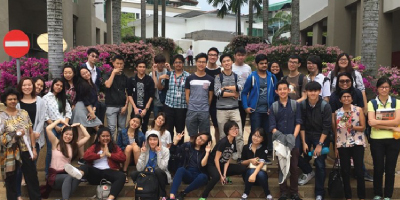 Course Trip on 'Much Ado About Nothing'

IB Diploma Programme students experienced a matinee show of Shakespeare’s critically acclaimed 'Much Ado About Nothing'. 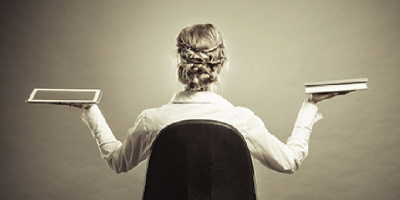 Not sure whether you should study pre-u programmes or foundation courses? Learn more about pre-university programmes at Taylor’s College! 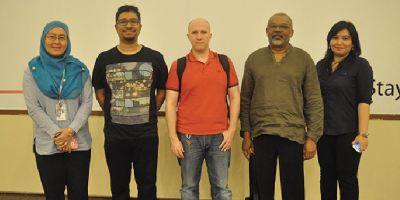 Reading Each Other Better