Flying from the Land Beneath the Wind, Jason is in currently in the American Degree Transfer Program (ADP) and is planning to transfer to Canada. He shares his experience of adapting to the hustle and bustle of city life, commuting around the area and the ins and outs of being an ADP student in Taylor’s.

Click the different tabs to navigate through the topics discussed during Jason Tang's interview.

[06:27] Danniel: Since you're from Sabah and here and doing ADP, did you have the idea to go overseas even before you came to Taylor's or did you decide that only when you came to Taylor's like "Oh okay maybe I'll take ADP"? I understand that you have majors in ADP, so could you tell us about what major you're doing?

[07:04] Jason: I've decided to go to Canada initially when I came to ADP. I had no thought of going to study overseas. ADP was the perfect choice because in ADP, even though I'm an applied science major, I took Economics, I took Accounting, I took Psychology, Sociology, basically everything to satisfy my curiosity of, "Oh what if I went for a Psychology major or Economy?” ADP is good because you can do whatever major, like Psychology, and try out different things. I would say the support system in ADP is actually very good. It guides you to a lot of the universities around the world.

[07:59] Jason: Your initial question was if I had any plans? No, but then the support system in ADP helped me to find my way to study overseas. So, all in all, it's because of Taylor's.

[11:40] Jason: Being a science student, I would say that it's okay. It's not like there's any difference from any schools but the difference is that the lecturers here care for your studies on a personal level.

[11:58] Danniel: Oh, it's also because our classes are smaller right? So there's more interaction.

[12:02] Jason: There's more interaction and they actually care that you do well. Like actually care and not put on a facade. The lecturers are very nice. If you're doing Applied Science, you need to go to labs. In the labs, they prepare a lot of materials and there hasn't been a time where we lacked a specific material that we needed. There was no instance where there was not enough resources for you to use when you come to Taylor's, they’ll provide.

[18:49] Danniel: (Student question) Another question that we have is "Why biochemistry? What was your goal or motivation?"

[19:06] Jason: It's a very weird story but I was a kid with a lot of acne which caused me to have very low self-confidence. So you have a lot of skin care products outside in the market. A lot of the products, though expensive, they don't work. Eventually along the way of trying a lot of stuff, I obviously found the right thing. It got me curious about all the face products that you can find on the market. I was interested in what they put in and how they formulate their formula. Not just that, I was also interested in cancer research on how to find better ways of injecting the cure. That was one of them. Initially, I actually wanted to go for biomedical science, which is also an offered programme in Taylor's. Though the reason why I chose biochemistry was because I wanted to stay off the medical field and I didn't want to be confined. So biochemistry is actually a more vast thing, but of course there's a lot more content you have to study.

[21:03] Jason: I guess the back end side of the chemical part of it all. Other than that, there's a lot of options too. I could go into medical research.

[21:15] Danniel: I also know you're here and doing ADP, as you know it, you choose your classes. So you're never with the same classmates unless your classmates choose the same course as you for the next semester. What are your friends like here in ADP? Were you able to adjust in groups for group assignments?

[21:38] Jason: Yes. Somehow it all worked out? Miraculously. It's easy to gel with the people in ADP because I feel like the people there are very liberal. More accepting so it was very easy to make friends. All you have to do is just nod your head every time you see the person and somehow just start a conversation somehow.

[22:49] Jason: Ya, I took Microeconomics, Macroeconomics. I took Psychology. I wanted to take Sociology but it wasn't offered during that semester. I took World Religions.

[13:29] Danniel: (Student Question) Another question is, "Is the buddy system the same as being a STAR Ambassador?"

[13:43] Jason: For STAR Ambassador, in some cases you are actually representing Taylor's. You are basically helping out with Open Day or public education fairs. That's entirely different from the buddy system. The buddy system only happens during orientation on campus because being a STAR Ambassador you have to sacrifice a lot of time and effort to help in organising all the activities during Open Day and education fairs.

[14:12] Danniel: I see. So you do those things like you bring parents around?

[14:16] Jason: Ya I do, and find general counsellors, lecturers and what not.

(Find out more about Orientation Days under 'Student Lifestyle: Getting Orientated' at 08:15)

[17:14] Danniel: (Student question) This question says, "I noticed you joined the Crimson League. Is it an exclusive ADP Sports Event? What's it about?

[17:23] Jason: It used to be just for ADP, but now it slowly integrated a lot of Foundation (people who do Foundation in Taylor's). Essentially it's like an interfaculty game so every school under the umbrella of Taylor's College can actually participate in Crimson. Though I'm not sure if they changed any of the policies already but to my knowledge, it's actually from ADP. So it's a league. In case you didn't know what a league is, it's like a sports series. So in leagues, there are houses. In Crimson League, there are four main houses and each of these four houses changes every semester. Every semester there's a new captain that comes up with the house. There's a new captain and environment to compete in terms of team spirit, teamwork, and attending the actual events because there are a lot of people that just joined and then don't go. So you can improve your soft skills during Crimson League.

[05:20] Danniel: I noticed that you are actually from Sabah.

[05:34] Jason: Coming from Sabah to Semenanjung, I had my friend inform about this programme (ADP) to me. ADP is short form for American Degree Transfer Program. It doesn't actually limit you so that you can only transfer within the States. You can actually have the option to transfer to Canada. Somehow everything just mysteriously fell into place and I came here. My first week here, was a bit daunting. It's a new environment and there were some struggles that I faced when interacting with people. I found it quite easy to fit in. Within three days, I started going out with friends already.

[12:50] Danniel: (Student Question) We have a question here, "Hi Jason! Did you find it difficult to transition into a faster paced KL lifestyle?"

[12:55] Jason: I would say yes and no, because I'm a fairly adaptive person so it differs from person to person. For me, it was to adjust and go through. It took me about a week I would say, to adapt myself to KL's fast-paced life, because in Sabah, everyone is very chill. Traffic jams don't exist but here it's like red lights.

[08:15] Danniel: Earlier you mentioned about orientation and the three days, what was your orientation experience? What happened in those three days? What did you learn?

[08:45] Jason: It was a relatively small intake of students. Our orientation was quite focused in the sense that it was a small group of students so everyone could bond better. During the first day, everyone is shy and introverted. The first day there was this thing they did in orientation called the 'buddy system', where one of the orientation leaders would take under their wing, about 2-3 people. The orientation leader would focus on those 3 people and talk to them more. I'm not sure if the Uni has this kind of system but for ADP, they have this buddy system. I think this was a very crucial part that helped me feel very comfortable.

[10:29] Jason: In the beginning, almost everyone will feel shy and anxious. Then, afterwards it was very easy because you have someone to go to during those first few days because what they did, they got my number and maintained my friendship with my buddies.

[10:50] Danniel: How did orientation prepare you? There was the campus hunt but is the ADP orientation similar in that sense also?

[11:08] Jason: Ya, it's similar. We have treasure hunt to get you familiar with all the facilities on campus. I think basically the entire campus tour.

[14:20] Danniel: What other things do you do, outside of STAR Ambassadors, for fun here on campus? Aside from outside of your lab work and your heavy classwork from ADP being a science major, what do you do for fun in Taylor's?

[15:18] Danniel: Oh yeah because the ADP classroom, we can just go in and use. Anyone and any time right? As long as there is no class.

[15:23] Jason: Ya. The lecture theatres are also sometimes open and there's like closing times for them but I'm not sure what they are.

What's Around the Area?

[15:57] Jason: I would say it's a mix of both. Because Taylor's is in Sunway and Sunway is like a city, there's a lot of places you can hang out and eat. There's a lot of good food that is near if you're not extremely picky.

Getting Around the Area

[16:37] Jason: No, I commute. Taylor's has a bus where students would just pay RM1.50 for the busses. One of the most convenient places is that the bus drops you off at Sunway Pyramid which is a gigantic shopping mall. Other than that, it's just the LRT station at SS15.

Places to Eat Around Campus

[23:16] Danniel: What do you normally eat here in Taylor's? Do you have a routine? Do you have any specific place to go? Any favourite place? Any place you recommend?

[23:35] Jason: Of course the budget is in view. One of the main high factors, but then I would say in terms of very nice food, I would say Prestige. Prestige food is good.

[23:54] Danniel: For those of you who are watching, 'Prestige' is the name of the restaurant.

[24:07] Jason: I'm more of a Go Noodle Bar fan. You should try. It's actually very nice. They have this combo of a gigantic platter of noodles with fish and chips. Very nice. 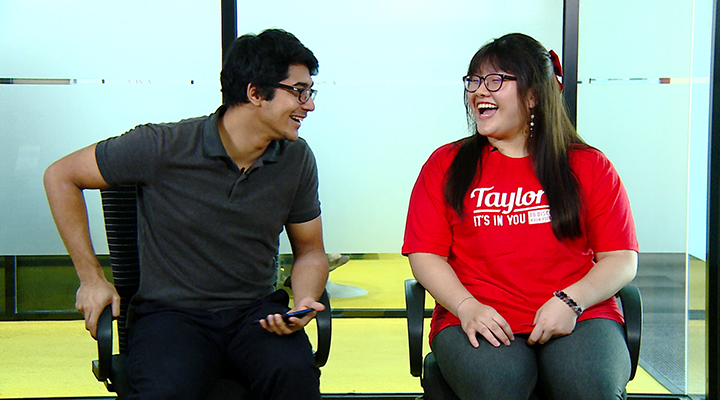 Get to know the Taylorian lifestyle through the eyes of this Penangite, Shania Tan, an Architecture student, STAR Ambassador, and Leo Club member. 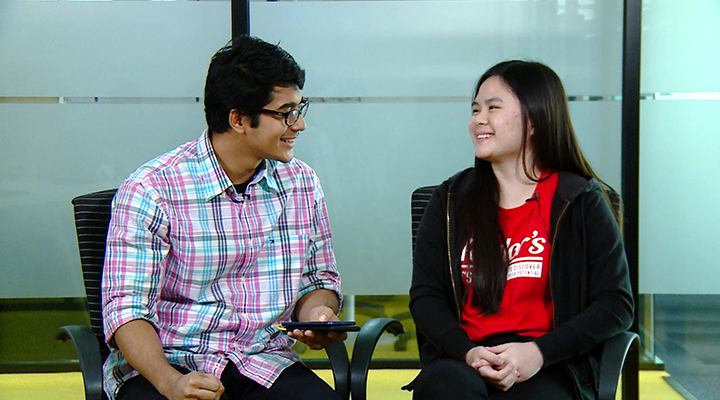 Get to know the Taylorian lifestyle through the eyes of Stephanie, Bachelor of International Business and Marketing, BURSA Young Investor, and STAR Ambassador. 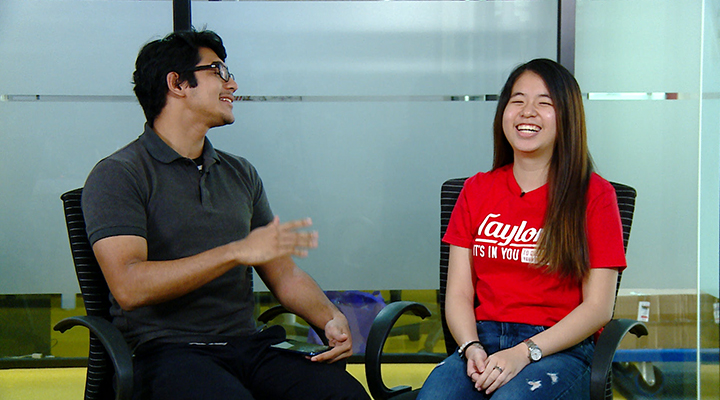 Get to know the Taylorian lifestyle through the eyes of Wong Mei Ting, a Bachelor of Business student, AIESEC member, and STAR Ambassador.