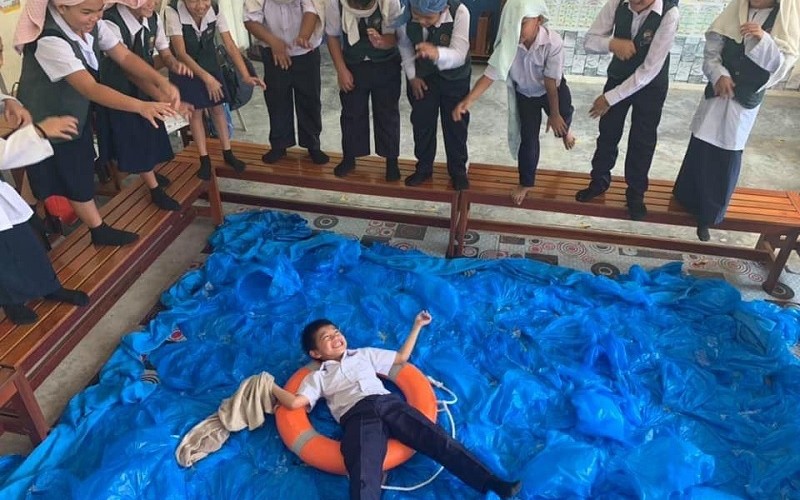 Cikgu Nazmi recreates a swimming pool in the class for his students who have never seen one before.

With words like “They will never become anything” thrown at children in remote Sarawak villages, teacher Muhammad Nazmi bin Rosli refused to be discouraged by discrimination against his students for their poor academic development, and poured his soul into teaching them, inspired by Marvel’s Professor Charles Francis Xavier (Professor X).

One parent, Jenny Bulan Gelawat, travelled over three hours from Kampung Long Sukang to the nearest town to get Internet connection in order to nominate Muhammad Nazmi for the Award, to ensure his efforts did not go unnoticed.

Muhammad Nazmi (aka Cikgu Nazmi) of SK Luagan, Lawas, who was previously a teacher at SK Long Sukang for four years, reveals that children of Sarawak’s rural villages – isolated from the outside world, where the nearest town is roughly four hours away via timber roads – are very far behind their urban counterparts.

“On my first day in SK Long Sukang, I was going to teach them about money transactions, but I realised the kids there have not seen ATM machines. They also have a problem with writing essays. Sometimes the exam questions are about talking of their experiences going to the beach or being on a plane, but they have never been to a beach or on a plane!” said Cikgu Nazmi.

Given that the villages are surrounded by jungles, with no Internet connection, rationed electricity and poor coverage, he reveals that teachers can become demotivated as they are not able to contact their loved ones or the outside community. Additionally, many view the children as ‘hopeless’. “People say; you don’t need to put in any extra effort. They won’t go anywhere. You teach them today, they will forget tomorrow. Why bother?” revealed Cikgu Nazmi.

Seeing his students face discrimination, much like the mutants in X Men, Cikgu Nazmi took it upon himself to implement the Danger Room concept.

“In the X Men comics, Professor X took in all the mutants and trained them in the Danger Room, where he used holographic simulations of the outside world. I see that my kids face the same things – they are disconnected from the world, they face the discrimination. So I bring the outside world to them,” explained Cikgu Nazmi.

As revealed in Jenny’s nomination, Cikgu Nazmi has simulated and build various scenarios in the classroom using easily available materials, such as constructing a swimming pool out of 200 plastic bags, a launderette out of cardboard and a train out of furniture.

The students made so much progress that even though only four students in the entire school passed their essay paper examinations four years ago, by the time Cikgu Nazmi was transferred to Lawas, SK Long Sukang had produced the highest scoring student in the district.

However, the recent Movement Control Orders in Sarawak dealt a blow to the progress of the school students, as teachers were only given one option – online teaching. “We were going around begging for options, but all our ideas were shut down,” Cikgu Nazmi said, adding that although there was a TV Pendidikan channel, neither Internet nor televisions were available to the children confined in their homes.

So together with SK Long Sukang principal, Cikgu Nazmi rode for hours on trucks carrying food into 13 villages to deliver homework and school materials to each and every 111 students – birthing what is now called the ‘offsite’ mode, now recognised and adopted by the Ministry of Education for rural and urban poor students.

His model of offsite learning, however, was successful due to cooperation from parents and villagers such as Jenny, who herself has turned her home into a ‘Learning Centre’ in order for students of the school to gather and collect the learning materials whenever MCO hits.

“There is a saying; it takes a village to raise a child. This is a literal living example of this,” said Cikgu Nazmi.

Cikgu Nazmi’s story is one of five nominations selected as finalists for the RISE Educator Award. Chalking up more than 20,000 cumulative likes on Taylor’s College Facebook, other inspiring teachers include Abdul Muiz Hussin who taught himself Mandarin in order to teach Mandarin to a fishing village, Hairul Azuan who helped collect funds for the needy in a FELDA community, Law Yee Chen who made efforts to ensure poor students were able to have access to devices and Internet data for online learning, and Teo Yuang Teck who saw the potential in a differently-abled student and taught him computer programming.

“Although many teachers go beyond the call of duty to effectively do their jobs, many take it for granted – sometimes the misdeeds are magnified, and the good stories are muted. The pandemic did educators no favors as teachers had to find new ways to meet the needs of their students, even our own Taylor’s academics were not spared. Raising the next generation is a community effort, and we’re so glad that The Rise Educator Award has surfaced incredible tales of kindness, compassion, determination and creativity shown by teachers, that have truly become an inspiration to Malaysians and all of us here at Taylor’s."

“And because the community needs to step in to ensure no child is left behind in their education, Taylor’s College intends to donate DuckiePi learning devices created by our own Taylor’s students to SK Long Sukang, pre-loaded with educational programmes for the benefit of students there,” said Josephine Tan, Taylor’s College Campus Director.

The Award also featured a Taylorian Edition, won by Taylor’s College lecturer Raja Imran Raja Azhar, whom the nominating student praised as a lecturer who was detailed, had high expectations of his students, and went the extra mile in explaining the teaching materials to them. 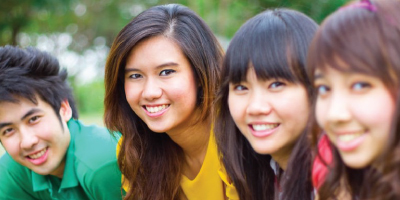 5 Things To Ask Your College Counsellor

Figured out which college you’d like to visit but would still like to know more? Head over to a college counsellor to help you go over the finer details. 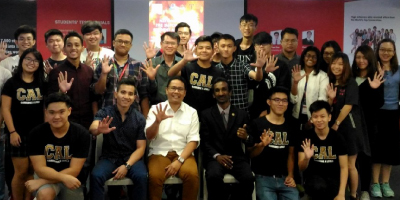 Nationbuilding: The Role of Student Associations 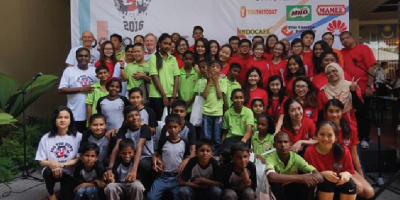